We’ve been here quite a while now ...

Thanks to Elizabeth Goss, who has been collecting information and conducting interviews with some of our old-time members, we have an insight into the trials and tribulations of the people who laboured to build and develop our golf course. 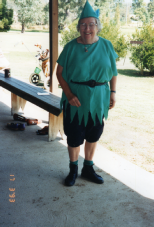 From 1929 until 1935 the Alexandra Golf Club was a nine hole course with sand greens on private property east of Alexandra.

In 1935 the Committee decided to move the golf club to an area of Crown Land adjacent to the town that was set aside for public recreation and administered by trustees. Here an 18 hole course was developed. The original club house was moved to the new site.

This was a site of about 115 acres originally with some 600 large red gum trees and other smaller trees scattered over the area. It was once used for football and cricket but the present tenants are the Alexandra Race Club and the Alexandra Golf Club.

The course was laid out after having a contour and feature survey made of the area. Holes and drainage were then developed to take advantage of the position of the gum trees and the natural topography. At first sand scrapes were used but owing to the scour of water across them on wet days, it was decided to install grass greens. The new course was opened for play in 1936.

Grazing of sheep was allowed on the course but was discontinued in 1952 so that the greens would no longer require fencing.

In 1956 water was laid on to all 18 holes which enabled the greens to be greatly improved.

In 1967, the old club house was burnt down. To replace it a building that was once part of the Utah Constructions Village at Eildon was purchased and transported to Alexandra to become the new club house. This was quite an achievement as the building is 120 ft long by 24 ft wide. The building, with various upgrades including a wide verandah, a large shade area and landscaping is still serving the club well.

In 1990 the club initiated the building of numerous dams on the site which have added to the challenges of the course and have resulted in the course being self-sufficient in water usage.

Our Club-House was originally part of the Utah Constructions township at Eildon.